Pastor Daniel Posted on January 14, 2020 Posted in Sermons No Comments 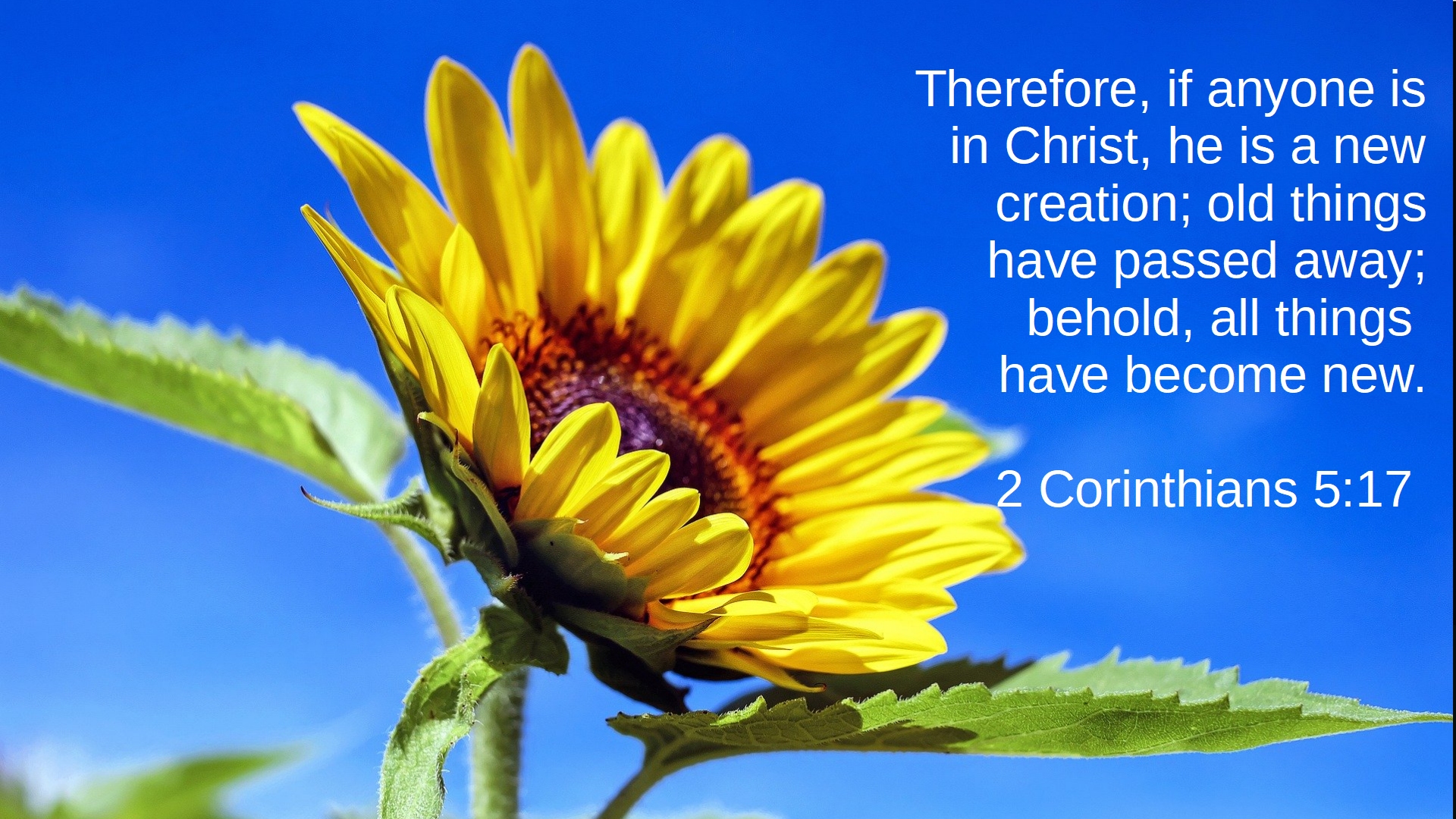 Do many of you like to go outside at night? I do, at least sometimes. Where we live, way out in the woods and far from town, the dark nights can seem almost pitch black. But often, there is a beautiful night light, shining down brightly from the sky. Earlier this week, I went outside and looked up at the moon. It was shining through hazy wisp of clouds, and all around the moon was a huge circle, like a milky rainbow. It almost looked like a giant bull’s eye, high in the sky, right over my head.

They say if you see a ring around the moon, snow or rain is on it’s way. I don’t know if that’s always true, but it does seem the rain is here. I’ve heard that this ring around the moon comes from ice crystals high up in the atmosphere. But at any rate, it was quite the sight, and I was thankful for the light as I walked outside, hunting for some forgotten item in the car.

It got me thinking, though. What makes the moon shine so bright at night? How come it shines full a bright sometimes, and other times barely a crescent of light shows along its edge? Is the moon like a giant lamp, hanging in the sky—a lamp with a shade, pulled over and around it, and then pulled back again? No, of course not.

Any school kid could tell you that the moon isn’t really a light, at all. It’s a big ball of rock and dust, orbiting around our earth each month. It lights up the night, not by its own light, but by reflecting the much greater light of the sun. Sometimes, the face of the moon is pointed towards the sun, and it shines down full and bright through the night. But other times, the face is looking away from the sun, and the only light on the moon is the light reflected from earth, or the small crescent of sunlight peaking around one side of the moon.

It reminds me of the great truth in Scripture. Jesus says in John 8:12, “I am the light of the world. He who follows Me shall not walk in darkness, but have the light of life.” Like the glorious sunshine, that fills the day with light and brings forth warmth, growth, and physical life, so Jesus Christ fills this world with the spiritual Light of Life.

But Jesus also says, speaking to His disciples in Matthew 5:14, “You are the light of the world.”

Some people would argue “yes.” There are many who believe that human beings possess virtually limitless, almost “supernatural” power. Some will tell you that the key to resolving our problem lies within ourselves. We simple need to learn to tap into this “inate” power within ourselves to better ourselves and to accomplish great good.

But if history is any guide, it seems that human nature has far more potential for evil than for good. What’s more, the Bible clearly teaches that human nature does not tend toward good. Ever since the fall of man, it would seem we have utterly lost the power of doing right. The psalmist says in Psalm 14:2-3:

2 The Lord looks down from heaven upon the children of men,
To see if there are any who understand, who seek God.

3 They have all turned aside,
They have together become corrupt;
There is none who does good,
No, not one.

No, the Bible doesn’t paint a very flattering picture of humanity. Not good. Sinful. Wicked. Constantly going astray. But God said to Israel—to faltering, failing Israel—in Isaiah 43:10: “You are My witnesses.”

How could the faltering Israel be witnesses to the true God of Heaven? In Isaiah 43:12, God says: “‘I have declared and saved, I have proclaimed, And there was no foreign god among you; Therefore you are My witnesses,’ Says the Lord, ‘that I am God.’”

It was only because of God—because of His salvation and grace—that Israel could be a witness to that grace. Just like the moon reflects the glory of the sun, so as we turn our faces to God’s glory, we can reflect His light to the world. So Jesus said in Matthew 5:14-16:

“You are the light of the world. A city that is set on a hill cannot be hidden. Nor do they light a lamp and put it under a basket, but on a lampstand, and it gives light to all who are in the house. Let your light so shine before men, that they may see your good works and glorify your Father in heaven.”

This was God’s plan for His people, ever since the fall. For who who were willing to enter into covenant with Him, God offered the promise to work through and transform their humanity into a picture of His own character. We find an example of this in the book of Exodus. When Moses went up to the mountain to receive the tables of the Ten Commandments from the hand of God, He communed so closely with God that his face began to glow with God’s glory. When he came down from the mountain, his face shone so brightly that the people couldn’t look at him until he covered his face with a veil!

God gave Israel His law, to show them a picture of His character so that they would realize the sinfulness of their own hearts. There at Mount Sinai, God wanted to enter into a special relationship with every man, woman, and child, so that their faces would shine just like the face of Moses. But it didn’t happen that way. Instead, the people focused on the Ten Commandments. They made a covenant based on what they intended to do. But all their promises didn’t have the power to transform their hearts and make their faces shine.

What is it that has power to make our faces shine? What is it that can transform the wicked, sinful heart of man into something that bring glory to God?

Proverbs 27:17 says: “As iron sharpens iron, So a man sharpens the countenance of his friend.” It is through relationship that we grow—not through rules, and the forms of religiosity—but through relationship with the One Who came to set us free. This is the essence of the New Covenant—not that we do away with the rules, but that we understand those rules in the context of that relationship. A relationship made possibly by cross of Christ, that through His death, we can be forgiven, but not only that, we can be transformed into what He created us to be, and reflect His light to the world.

Proverbs 27:19 “As in water face reflects face, So a man’s heart reveals the man.”

Paul wrote to the Corinthian believers, who were being transformed by the Holy Spirit, that “You are our epistle written in our hearts, known and read by all men;” (2 Corinthians 3:2)

How did they—and how can we—become this living epistle of Christ? It is through the power of the Holy Spirit in the New Covenant relationship. That is, by behold Christ. By looking at His face, and allowing Him to transform us. Paul concludes in 2 Corinthians 3:18:

“But we all, with unveiled face, beholding as in a mirror the glory of the Lord, are being transformed into the same image from glory to glory, just as by the Spirit of the Lord.”

This is a principle of life. By beholding, we become changed. Every one of us is like a small lump of clay. Whether we know it or not, we are changing. The things we behold—they things we look at, the things we listen to, the people we interact with, they things we think about and dwell on—these are slowly forming and transforming our characters.

My friends, what do you spend your time thinking about? What thoughts and ideas fill your mind, not just on Sabbath at church, but at home, at work, or wherever you are? Are your thoughts true, noble, and uplifting? Or do they tend toward criticizing others, thinking the bad of others, or complaining about our situation. Sure, there are times when we have to recognize evil—this is the world we live in, but if we dwell on the evil, it can infect our hearts with its darkness.

What do we allow to fill our minds? What entertainment do we enjoy? What do we like to read? What music do we listen to? What do we watch? Who do we like to hang out with? We might think, “I’m mature. I can enjoy something and it won’t affect my Christian experience.” But what will we be reflecting, if we don’t constantly behold Christ?

The moon has been shining in the night sky for thousands of years, but every time its face is turned away from the sun, it becomes dark. It’s the same in our lives. We may have been in the church for years, but are we still reflecting Christ?

What does it mean to behold Jesus? What does it mean to reflect Him in our lives? Well, a good place to start would be to read the Scriptures. Read the story of His life, as found in the gospels, and meditate on it every day. Speak to Him in prayer. Confess your sin and accept His forgiveness. Invite His Holy Spirit into your heart, and allow Him to cleanse and transform it, day by day, hour by hour.

Paul writes in Philippians 2:5-8: Let this mind be in you which was also in Christ Jesus, who, being in the form of God, did not consider it robbery to be equal with God, but made Himself of no reputation, taking the form of a bondservant, and coming in the likeness of men. And being found in appearance as a man, He humbled Himself and became obedient to the point of death, even the death of the cross.

I will be the first to confess—I have a long way to go. Every day I am painfully reminded that I don’t reflect Christ fully as I should. It’s a walk by faith, and we’re all on this journey. I can’t begin to imagine the infinite humiliation of Christ, yet Paul holds of Christ as the pattern of what our minds and hearts should look like.

Have you ever taken a walk outside on a dark night with a flashlight? It’s an amazing experience—especially in the woods. Many creatures lurk in the darkness, but their eyes are drawn to the light. As they turn to face the light, those eyes reflect the light and begin to glow, as if they, too, were shining a flashlight back at you. Often I’ve found our cats, staring at me from the woods. Once I saw a bobcat—he stared at me for several seconds before slinking silently back into the woods. Last night, as I was walking, I saw the glittering eyes of thousands of spiders, looking up at me from the grass.

How do we reflect the light of Jesus? How do we become that light—like the city, set on a hill? My friends, look to Jesus. Behold His glorious face. Like the sunflower, keep your face turned toward His, and you can’t help but be a shining light to His praise and glory!

2 Corinthians 5:17 Therefore, if anyone is in Christ, he is a new creation; old things have passed away; behold, all things have become new.