↓ Skip to Main Content
Home › Sermons › Crouching at the Door

Crouching at the Door

Pastor Daniel Posted on August 8, 2020 Posted in Sermons No Comments 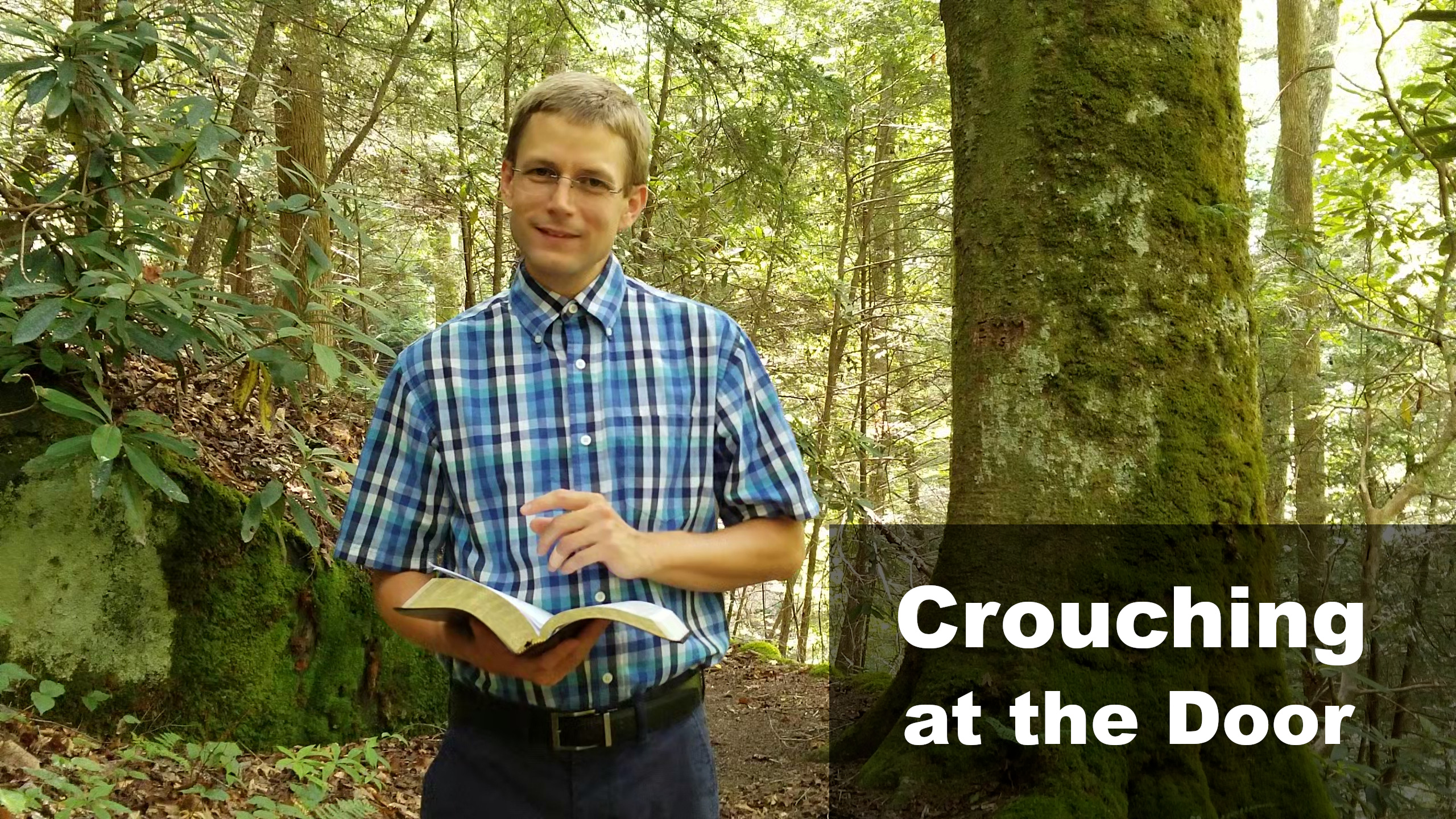 A couple months ago, I was sitting outside in the backyard of my house, getting a bit of sunshine, when I noticed our cat, Smoky, intently watching and chasing something in the yard. On closer inspection, I discovered she had cornered a mouse. Now I don’t particularly like mice. That’s one reason we keep a couple of cats, because without the cats, the mice just get into everything. The cats keep the mice under control, but as I watched Smoky sitting there, stalking the mouse, following it’s every move, and I saw those beady little eyes, pleading for help, I just had to let this one little mouse get away. I picked up the cat, and took her away to her cat-shed, and let the mouse run away into the woods.

As I reflect on this little incident, though, it makes me think of a much more serious and sinister enemy—not the enemy of a mouse, but an enemy of human beings. A man-eating lion, if you will, that is hot on our track, and wants nothing more than to torment us and destroy us. What kind of monster could this be—and how can we escape it? These are just a few of the questions we’ll be looking at in today’s message: Crouching at the Door.

In last week’s message, we looked at a simple story found in the very first chapters of Scripture: the story of Cain and Abel. As we dug into this story, we explored the meaning of the sacrifice that God had instituted all the way back in the garden of Eden. We saw how this sacrifice pointed forward to the great centerpiece of the gospel message—the death of Jesus Christ, and what it means for you and for me. But we really left off in the middle of our story of Cain and Abel, so today I’d like to go back to the story in Genesis 4, and find the lessons God has for us here.

… So Cain was very angry, and his face fell. 6 The LORD said to Cain, “Why are you angry, and why has your face fallen? 7 If you do well, will you not be accepted? And if you do not do well, sin is crouching at the door. Its desire is for you, but you must rule over it.”

Is it wrong to be angry? Often as Christians, we think we should only express certain emotions like peace and happiness, and suppress other emotions like anger or sadness. That’s not necessarily right. The Bible says “Be angry and do not sin; do not let the sun go down on your anger.” (Ephesians 4:26)

But the patriarch Moses was angry when he saw the sin of the children of Israel. He cast down the tables of stone that God had given him, containing the ten commandments, and they broke in pieces on the side of the mountain!

In fact, the Bible says that it is right to be angry against sin—but we must remember that God is ultimately the One Who will deal with the sin problem.

I love the 37th chapter of Psalms, which teaches us that God is the one who will ultimately judge evildoers and bring justice to the earth.

Psalm 37:1 Fret not yourself because of evildoers;be not envious of wrongdoers!

So it is right sometimes to be angry. But was Cain’s anger a “righteous indignation?” No. Cain was angry—but more accurately, he was envious. He hated the fact that he had been reproved for his wrongdoing.

When we feel anger, how can we know if our anger is good and righteous indignation, or if it’s simply a selfish anger like Cain? I like to ask myself one simple question: am I angry against injustice done to me, or angry at injustice done to others? It’s not always a perfect test, but it can help us to identify whether our anger comes from the selfishness in our own hearts, or from a right sense of justice.

Another question I might ask myself is this: “If our roles were reversed, would I still recognize the injustice?”

At a deeper level, we’re dealing not just with the question of anger, but a question of sin. What is sin? “Sin is the transgression of the law” (1 John 3:4). The story of Cain and Abel, and God’s word indicting Cain of sin, indicates that already, Adam and Eve, and Cain and Abel knew God’s law. Even though it’s not recorded in Scripture until Exodus 20, God’s law has always existed. God’s law becomes the standard by which we can judge the ever-changing feelings of our hearts. Only by God’s word, can we know how to manage and direct our own anger.

Another principle of managing anger comes from Ephesians 4:26: “do not let the sun go down on your wrath.”

Anger is a response that God gives us—to protect us from evil, and to empower us to fight for justice. But anger in our minds is sort of like inflammation in our bodies. If I hurt myself, my body will produce an inflammation in that area. It might stiffen my joints, swell the skin, and lead to more pain. But the inflammation helps heal my body, by bringing more blood to the area, etc.

But if I have a chronic inflammation, like many people deal with, it doesn’t help my health. It can be detrimental to our health, because the body is constantly fighting, and creating more pain in a never-ending cycle. It’s the same with anger—if we let it turn into a grudge against someone. It’s no longer helping us fight evil, because we internalize it, and all that energy ends up destroying everything noble in ourselves.

I think this is what happened to Cain. He didn’t lash out in anger and slay his brother there in front of the altar. It took time, but the more Cain mulled it over in his mind, without surrendering his anger to the Lord, the more it worked on him, until eventually it led him to the point of murder.

Where did this envy lead him?

We will come back to this issue of anger, but first, let’s explore this principle that God states.

Do well – Be accepted

This is a foundational principle of justice. You might call it the “Law of cause and effect.” Obey and be blessed. Disobey, and suffer the consequences.

Deuteronomy 30:19 I call heaven and earth to witness against you today, that I have set before you life and death, blessing and curse. Therefore choose life, that you and your offspring may live.

15 “See, I have set before you today life and good, death and evil. 16 If you obey the commandments of the LORD your God … then you shall live and multiply, … 17 But if your heart turns away, … 18 … you shall surely perish. …

19 I call heaven and earth to witness against you today, that I have set before you life and death, blessing and curse. Therefore choose life, that you and your offspring may live.

Do not well – be overtaken

Genesis 4:7 “And if you do not do well, sin is crouching at the door. Its desire is for you, but you must rule over it.”

Sin—by it’s very nature—takes over our lives. Like a cat, or a lion, it lies quietly by, waiting for us to play with it. Then, when it’s too late, it “pounces” and destroys us.

This week, while I was working over at our London church building, I noticed on one side of the church, something very interesting. On one side of the church, the ground is entirely covered with pavement and a rock garden, with plastic that should prevent any weeds from growing. But there, in the cracks of the pavement, and growing up between the rock garden and the building, were these little vines. They had found the tiniest cracks, and over the weeks while we haven’t been meeting, they have begun to spread over the pavement, up the walls and through the rock garden. It’s sort of like sin in our lives—it finds the tiniest cracks in the wall, and starts to grow. We might think, “Oh well—I have a pretty good life. A little sin won’t get too far.” But just like those vines, once they get started in the cracks, it doesn’t take long before they take over the whole life.

Be sober-minded; be watchful. Your adversary the devil prowls around like a roaring lion, seeking someone to devour. 1 Peter 5:8

For whoever keeps the whole law but fails in one point has become accountable for all of it. James 2:10

Sin seems to small to notice, until it’s too big to control. It’s easy to excuse one “little” sin in our lives. The “little” habit. The occasional indulgence. But the story of Cain and Abel teaches us otherwise.

Genesis 4:8 Cain spoke to Abel his brother. And when they were in the field, Cain rose up against his brother Abel and killed him.

Wow. From a “hater” to a murderer. Who would think that a little hatred could lead to murder? But Jesus taught that even holding hatred in our hearts can make us guilty of the sin of murder!

“Every act of transgression, every neglect or rejection of the grace of Christ, is reacting upon yourself; it is hardening the heart, depraving the will, benumbing the understanding, and not only making you less inclined to yield, but less capable of yielding, to the tender pleading of God’s Holy Spirit.”

“Even one wrong trait of character, one sinful desire, persistently cherished, will eventually neutralize all the power of the gospel. Every sinful indulgence strengthens the soul’s aversion to God. The man who manifests an infidel hardihood, or a stolid indifference to divine truth, is but reaping the harvest of that which he has himself sown. In all the Bible there is not a more fearful warning against trifling with evil than the words of the wise man that the sinner ‘shall be holden with the cords of his sins.’ Proverbs 5:22.”

Friends, is it important to have victory over sin? Yes—it can mean the difference between life and death! But how can we have victory over sin in our lives? In our text in Genesis 4:7, God tells Cain, speaking of sin, “but you must rule over it.” Friend, are you ruling over sin in your life today—or are you letting sin dominate your life, even if you think it’s just a “little” sin.

I pray that you will contemplate these Biblical steps to gain victory over sin in your life: